One of the key aesthetics of the bonsai tree is its moss.

The best moss species for bonsai are silver moss (Bryum argenteum) and other moss in the Bryum family because they have all the qualities necessary for bonsai moss and are easy to collect for free as well as propagate.

The qualities you should look for in your bonsai moss are; The moss is an important part of the aesthetics of the bonsai tree.  The moss at the base of the trunk enhances the beauty of the bonsai tree and gives the impression that the tree has lived for a long time in that state.

In this regard, bonsai moss should be relatively small in height and not so conspicuous.  If it is too large or tall, bonsai trees do not look like fully-grown ones in nature.  There are kinds of moss that grow a few inches tall, which are good for moss terrarium,‎ but not suitable as bonsai moss.

Also, the color of the moss should match the tree.  Moss can be yellow, brown or grey but the greenish color best matches the bonsai tree. The moss can help retain water and stop the soil in the pot from flowing out.  The kind of moss that gather together in a lump and bind the soil is good bonsai moss.

Moss has excellent water absorption and water retention ability thanks to its sponge-like structure.  It can do a good job of preventing the bonsai tree from drying out when it is hot in summer.

Moss can also prevent the soil from flowing out, especially for those that have just been repotted as the roots of the recently repotted bonsai tree are not fully developed and could flow out when watered.

Fit the climate of the region Bonsai moss should fit the climate of the region you live.  If you live in California whose climate is warm and dry,‎ for example, moss species that prefer high humidity and less sunlight might not survive.

Visit your local natural museum (or its website) to learn which species of moss grow in your region.  Those which grow naturally around you are the best moss for your bonsai trees.  Be careful, those readily available on the internet might be good for terrarium but not be fitted to grow with your bonsai trees. The best moss species for bonsai

The best species for bonsai moss is silver moss (Bryum argenteum) and other moss in the Bryum family because; 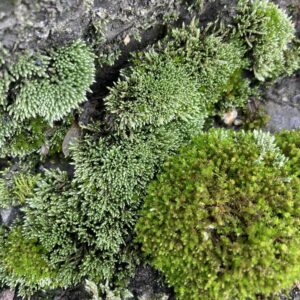 Bryum argenteum,‎ also known as silver moss, is the most common urban moss found all over the world.  It is usually silvery-green colored but becomes whitish-green when dry or absorbed too much sunlight.

This is a kind of moss that each moss grows together and becomes a lump.  When it grows densely, a lot of light brown rhizoids (kind of roots for moss) function as roots at the bottom of the stem to bind the soil together.‎

It has a high ability to tolerate strong sunlight and drought and can even withstand total drying.  As silver moss is a cosmopolitan species, you can easily find it in gaps of paving stones, on asphalt, or on roadsides around your house.

Silver moss reproduces by pollen-like eggs.  Once the sperm are produced and released, they swim to the female structures.  After an egg is fertilized, the capsule on a stalk is produced (as seen in the picture below) which contains spores that are released once they mature. You can propagate silver moss by mixing capsules or cuttings of the moss with the soil and scatter it on top of the bonsai soil.‎  The moss will grow fully in about a month when it is warm.

Other moss in the Bryum family

Bryum, including silver moss, is cosmopolitan moss in the family Bryaceae that contains the largest diversity of mosses, and many of them are fit for bonsai moss.  They can withstand extreme heat as well as cold as moss.  In fact, some of the moss in Bryum family thrive in Antarctica.

Here are some of the examples of the Bryum moss that are good for bonsai. The stems of fire moss are erect, usually about 0.5 inch (1.3 cm) long, and each moss grows together and form dense carpets.

Fire moss is typically found growing on urban roadsides or dry soils.  It is one of the most common cosmopolitan mosses found worldwide and occurs in every state in the US.  It is most likely growing in a site that is exposed and dries out rapidly, such as on walls, roadsides and rooftops.  The common names “red roof moss” and “fire moss” make reference to some of its preferred habitats.

From spring to fall, fire moss forms purple capsules a couple of inches long.  You can cut them out if it is disturbing the look of the bonsai tree. Bonfire moss is light-green and upright, and about a half to an inch tall.  The short shoots of this moss (0.5 inches/ 1cm) form loose carpets.  The egg-shaped leaves vary in size (0.08-0.16 inches long / 2–4 mm long) and are translucent.‎

From spring to fall, bonfire moss form swan-neck-like capsules of 1-2 inches (3-5 cm) long.  You can cut them out if it is disturbing the look of the bonsai tree.

Bonfire moss is a type of water moss that grows on moist soil in a shade, like in the backyard or the side of the field. Undulate atrichum moss is dark green but is yellower under the sun.  Individual stems are upright, unbranched, and grow to 3 inches tall, with long, narrow, pointed leaves up to 0.4 inches (1 cm) long.

Undulate atrichum moss is usually found in shaded, well-drained places, but it also occurs in unimproved and semi-improved grasslands or on rocky ledges.  It is native to North America and Europe.‎

It usually produces several capsules per shoot, and these remain in situ, so old fruits appear lateral on growing stems.

Other moss in the Atruchum family

It is star-like shaped moss and is native to North America and Europe.