Japanese maple trees lose their leaves in fall and go dormant in winter.  Winter dormancy is a protection measure for them to survive freezing temperatures and harsh wintertime environments. During dormancy, deciduous bonsai trees like Japanese maples do not need sunlight as they are in deep suspended animation.  You can leave your bonsai trees where they were, if they do not need a protection facility, or move them into a shed or garage.

For more about bonsai trees and sunlight in winter, please check the following post.

“Do bonsai need light and water in winter?” (link here)

On the other hand, they do need water as their root system does not go dormant, though its growth is almost nonexistent.

Under a temperate climate, you should water your bonsai tree once every three days in winter when the soil is half dry.  Watering in winter should be done late in the morning so that the water in the soil is adequately drained and dried before sunset to protect the roots from freezing.

For more about bonsai trees and watering in winter, please check the following post.

“Do bonsai need light and water in winter?” (link here)

In winter, they stop growing altogether, at least in the aboveground parts.  And as such, they do not need nutrients during this period.  Fertilizing in winter will do more harm than good when they are not growing. Although Japanese maple trees in nature are quite cold hardy and can tolerate US hardiness zones from 6 to 8, Japanese maple bonsai trees are good to be outside in winter only in zone 8.

Even in zone 8, however, buds and the tips of the branches may die if the soil is left too dry and exposed to low temperatures for some time.  Also, roots are more susceptible to cold than aboveground organs.

So, you need to take measures against the cold before it gets too cold.

The main sources of winter damage to Japanese maple bonsai trees are wind and frost.  Snow can be problematic if it snows heavily to the point that breaks the branches. When the wind blows, the rapid air movement causes moisture to be lost from the soil.  If the soil becomes too dry, trees may not be able to replace moisture lost for branches and trunks as well as roots.  If the soil is frozen, they are not able to extract water.  The branches soon become desiccated and scorched.

By blocking the cold wind, the soil in the pot will be less likely to freeze, and the branches will be prevented from withering.

You can build windbreaks using netting, pre-fab windbreaks, or woven fences from the angle the wind is blowing.  The screen should filter about half of the wind.  Solid barriers such as garden walls and fences will not completely stop the wind from your bonsai trees but only deflect it over the top.  This may cause damaging turbulence near the barrier. Although Japanese maple bonsai trees protect themselves by becoming cold hardy, their cells can well be damaged or even destroyed by frost.  Repeated freezing and thawing can be particularly damaging.  A strong wind can make a frost more damaging once the temperature falls below freezing.

Frost protection protects against the cold in winter, but it also prevents the buds from being damaged in early spring.

Cover your bonsai trees with a plant cover or other suitable protection just before frost.  You can also move the pots under the shelf if you usually keep them on it. 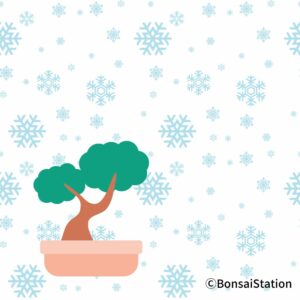 Heavy amounts of snow and ice on the branches of weak-wooded deciduous trees such as Japanese maples can cause considerable damage.  It is thus necessary to prevent snow from accumulating on your Japanese maple bonsai, as the weight of the snow can easily snap branches or tilt the tree to fall out of the pot with the soil.

Put several plant supports around the bonsai, tie their top, and wrap the whole bonsai with a plant cover to protect it.  You can also move the pots to a place where snow does not pile up. Bonsai trees are more susceptible to cold than field-grown plants.  Roots in general are much less cold-hardy than shoots and the roots of container-grown plants such as bonsai are not protected from cold temperatures by the soil.

According to this scientific research, root killing temperature of container-grown Japanese maple trees is 14°F (-10°C).  This temperature is the highest temperature that killed more than 50% of the root system and reduced top growth.

If you live in a region where the temperature continues below this level for some time, you might have to think about keeping your bonsai trees in a greenhouse or some kind of cold protection facility.

In order to bring the maple bonsai into proper dormancy, it is important to let them experience the cold and put them into a protection facility as late as possible.

The protection facility should have little temperature difference between day and night.  It is bad for bonsai to become too warm because it might trigger them to break dormancy.  So, the facility should allow sunlight to enter but allow ventilation when it gets hot.

In this sense, a small greenhouse is not ideal.  Your bonsai trees may well be damaged by putting them in a shelter.  To avoid damage, you can put a double layer at night.  Block the sunlight on the north and west side as well as the top.  Ventilate during the day to avoid temperature differences.

How Cold Is Too Cold For Bonsai?
How To Repot Japanese Maple Bonsai