In fall, we usually see a natural art show when Japanese maple leaves begin to change from green to yellow and then into vibrant reds.  But this does not happen every single year.  There are times when Japanese maple bonsai are not turning red enough or it shed leaves before turning color.

In this post, I will explain why your Japanese maple bonsai is not turning red and how to make it redder.

Why is my Japanese maple bonsai not turning red?

Before diving into why is your Japanese maple bonsai not turning color, let me explain how it changes color.

What makes the leaf color The leaf’s green color is determined by the ratio of the green pigment and the yellow pigment contained in the leaf cell.  As the number of yellow pigments increases, the color tone changes from blue-green to yellow-green to greenish yellow.

In the growing season As the day gets shorter and the night gets longer in fall, Japanese maple trees start to produce anthocyanins (red pigment) in response to bright sunlight and excess plant sugars within leaf cells. The color change of Japanese maple trees is primarily triggered by the followings.

In early autumn, the veins that carry fluids into and out of the leaf start to gradually close off as a layer of cells called an abscission zone forms at the base of each leaf, in response to the shortening days and declining temperatures.‎  These clogged veins trap sugars in the leaf and promote the production of anthocyanin (red pigment) by the chemical reaction of sugar and protein.

Temperature changes during the day When the temperature is relatively high with warm, sunny daytime which drops to cool and crisp temperatures at night, a lot of sugars are produced in the leaf.   But because the cool nights bring the gradual closing of veins going into the leaf, these sugars are prevented from moving out and trapped in the leaf.‎  These conditions, lots of sugar and light, spur the production of anthocyanins (red pigment). 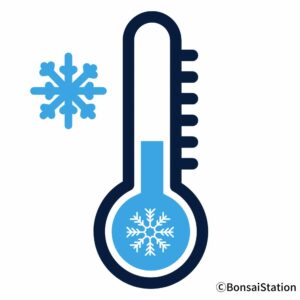 From an empirical standpoint, the leaves of Japanese maple trees change color almost fully in around 3 weeks after the minimum temperature falls below 46° F (8°C).

Why is your Japanese maple bonsai not turning red?

There are four reasons why your Japanese maple bonsai is not turning red: Japanese maple trees have to store enough plant sugar to produce anthocyanins (red pigment) to change leaf color.‎  To do this, they need sunlight as well as carbon dioxide and water for photosynthesis.

If they do not get enough sunlight before the fall season, they lack the energy they need to produce anthocyanins, which makes the leaves look red.  Keeping your Japanese maple bonsai indoors will easily lead to a lack of sunlight. Although it is not scientifically proven to this day, the formation of the separation layer that promotes the production of anthocyanin (red pigment) at a leaf base is in part triggered by a temperature drop in fall.

If warm weather continues in fall without adequate temperature drop, the production of anthocyanin (red pigment) would not progress for the leaves to change color beautifully.‎

Lack of temperature changes during the day 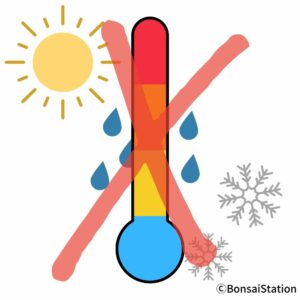 Chlorophyll (green pigment) in leaves is broken down fast when the temperature difference in a day is large.  Without enough temperature changes during the day, the green pigments continue to remain, masking the red pigment produced in leaves.‎  A warm period during fall will in fact lower the intensity of autumn colors.

Lack of moisture in the soil The amount of moisture in the soil also affects autumn colors.  A very hot summer without adequate watering will not just delay the onset of fall color but also cause irremediable leaf scorch.

Favorable spring/summer weather with adequate sunlight and rains, in addition to warm sunny fall days with cool nights, will produce the most brilliant autumn colors.‎

How to make your Japanese maple bonsai redder

Change the amount of sunlight it gets The amount of sunlight the Japanese maple bonsai gets is crucial for the beautiful color change as the sunlight is essential to produce energy and red pigment in leaf cells.  Adequate sunlight for the autumn colors is as follows.

Why make shade in summer

Japanese maples are prone to leaf scorch.  Although leaf scorch rarely causes long-term damage to the tree itself, leaves turn brown, particularly around the tips and margins.  It is followed by the leaves curling and shriveling if the stress is hard enough.

Leaf scorch occurs when water is lost from the leaves more quickly than the roots can take it up.‎  It often happens during the hot summer day when water is evaporated through leaves but the water absorption by the roots is less than it should be.

There is no cure for leaf scorch, only prevention.  Once browned, the leaf cells are dead and unrecoverable to enjoy autumn leaves.  This is why making a shade for Japanese maple trees is important.

When Japanese maple trees are given fertilizers with less nitrogen content, the leaf color turns brighter red than usual earlier in the season.

With nitrogen deficiency, the leaves of Japanese maple trees produce less chlorophyll (green pigment) which starts to break down earlier.‎  The yellow color from carotenoids thus becomes noticeable from early on.

The ideal fertilizer for a fully-shaped Japanese maple bonsai is 4.4% nitrogen, 4.0% phosphoric acid, and 1.7% potassium.‎  Reduce nitrogen and increase the proportion of phosphoric acid and potassium if you want brighter autumn leaves.

Keep in mind that although this is a good way to see beautiful leaf color, the leaves might fall quickly and the growth of trees might not be as good as it should be.

Defoliate in the right season

Things to consider when defoliating

Also, defoliation can only be done to the trees with enough strength to bear the stress, such as younger trees or trees that are given abundant fertilizers the year before.

When watering Japanese maple trees, give abundant water from above the leaves as well at least once a week to wash away dust and other dirt from the leaves.‎  This will ensure that the leaves get the sunlight they need.  Make sure that the soil will not dry out in summer as the Japanese maple leaves need constant moisture in the soil for autumn leaves.

Continue watering the leaves before the tree starts to change color to give the leaves enough moisture.

To know more about the benefits of watering leaves, please read the following post.

Reduce the frequency of watering after the leaves start to turn red because the absorption of water from the roots becomes quite low at that time.  Make sure, however, that the soil keeps enough moisture as the leaves will die off very quickly in a short period of time when the soil dries out.  Exposing the tree to night dew is a good idea as the leaves get water naturally, and the tree gets humidity and fresh air.

It is crucial to avoid frost at this stage.‎  When exposed to frost, the leaf color changes from red to brown in an instant and leaves fall off the tree.

If you want to keep your Japanese maple bonsai indoors to see the autumn leaves, it may not change color brightly.  In that case, place your bonsai tree outside during the night to expose it to the night dew and cold air.  Also, be sure to give water to the leaves as well.

Can Any Maple Tree Be A Bonsai?
How To Identify A Maple And A Japanese Maple